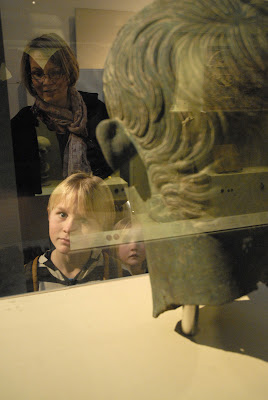 One of those pictures that I like mainly for personal reasons, the memory being better than the image per se.

I sneaked in for a candid shot of them looking at Augustus' Head at the British Museum, and when Greg caught me he gave me one of his intense stares! The look mirrors Augustus' fearsome expression, although you can't really see it

Check out the BBC article below...
the link take you to the iPlayer version 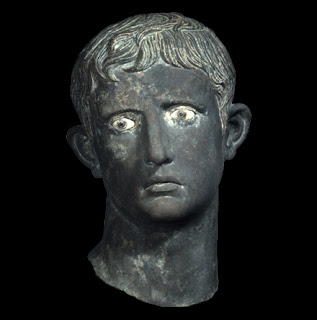 Head of Augustus, the first Roman emperor. Neil MacGregor, Director of the British Museum, looks at one of the world’s most famous rulers, whose powerful, God-like status is brilliantly enshrined in a 2000-year-old bronze head with striking eyes. He explores how Augustus dramatically enlarged the Roman Empire, establishing his image as one of its most familiar objects. The historian Susan Walker and the Mayor of London, Boris Johnson, help explain the power and methodology of Augustus.
Posted by jonboy at 10:14 pm