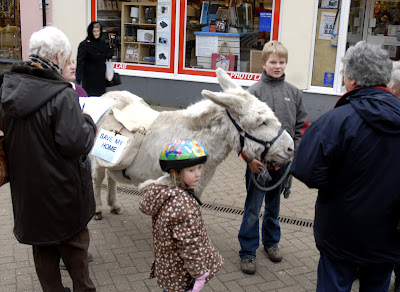 Lewis has been out on the streets of Hythe with Domino the Donkey along with supporters of the campaign to stop New Forest District Council from building houses on Barry's Field.

Since we moved to Hythe, the smallholding has been at the heart of our community; the kids have learned about animals at first hand and we've had endless fun there over the years. All the kids have ridden the donkeys, and they have also walked the goats, as well as helped with the feeding and putting to bed of the 35 or so animals in the field.

So today it was out in force to gather signatures to tell NFDC they can keep their hands off... So far the supporters who are signed up amount to over a thousand, hardly a ragged handful.

There's a consultation meeting in Hythe on 23rd Feb at the Community Centre -
Come and have your say at the Public Consultation to be held on Wednesday 23rd February 2011 between 3:00pm and 9:00pm at Hythe & Dibden Community Centre, Brinton Lane, Hythe.
Posted by jonboy at 8:51 pm