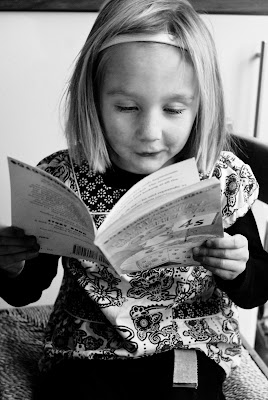 We've been reading from the Septimouse stories most of this week, which Miranda enjoys. She prefers her ad libbed version of the story to the verbatim, and I have to be honest, sometimes it's much more fun to listen to her make it up, rather than take her through the words one by one.

Lewis is playing 'Empire State of Mind' tonight on his guitar with no music to hand. As he starts to listen to more music on his own he's developing a taste for what he likes... and it just so happens I like it too!

There's a great article on the BBC site today about the decline of the record shop by Graham Jones who has revisted many of the shops he knew and recorded them within a book. A few times recently I have done something similar,  although just standing drop jawed outside 'Ray's' and 'Dobells' in Covent Garden who no longer sell Jazz records, but Pizza or somesuch product. By contrast however we were in Boscombe recently, and there delight of delights, I found Snu-peas still trading.

http://www.lastshopstanding.co.uk
Posted by jonboy at 10:28 pm