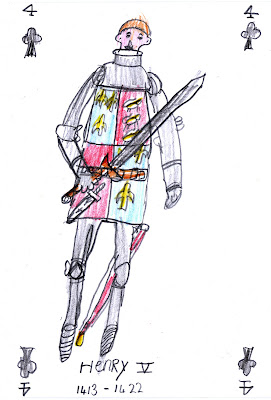 Time for another one of Greg's lovely illustrations I think! I'm also hoping that by paying a bit more attention to matters historical, I start to absorb some of the gaps in my education. A bit late you may say, but better late than never.

I was joshing with Greg last night at bedtime, after he made some remark about older people knowing so much more than him. I told him that I knew everything that there was to learn, and then sensing that I was bragging, he said "Well who was the first Roman Emperor then?"

"Begins with an A; ...is it Augustus?" He was delighted with my reply and said "Yes Dad, you got it right!!"

I had to own up that the only reason I knew was that he'd mentioned this a few weeks ago as a fact when we were looking at the statue head at the British Museum. You live and (hopefully) you learn.
Posted by jonboy at 10:43 pm