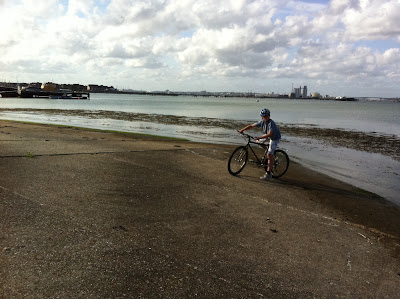 The kids love coming down to what they call "the beach" in the village. Unusual you might think to find a concrete beach, but this is part of unique Hythe.

It's really the slipway that was originally part of Cristopher Cockerell's Hovercraft business in the sixties, but before that it was home to the British Military Power Boat Company which in the Thirties and Forties built the finest motor launches for the Navy.  You can see one of the 100 class boats being restored on the LHS of the picture.

Above Lewis' head is the berth where we normally see all the Cunard ships; The Queen Elizabeth, Queen Victoria and the Queen Mary 2.

In the deeds of our house it says that we are not allowed to go across the water by hovercraft into Southampton. Apparently in the sixties they had visions of hundreds of commuters travelling over to the city, how this would have been less desirable that commuting in a car I am not sure....
Posted by jonboy at 10:16 pm