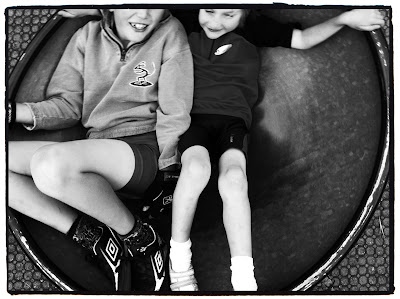 Sunny to begin with then turning quite cold and windy, my bike ride with Greg and Miranda took aturn for the worse when her (her bike's) bottom bracket seized completely. Interesting this as Lewis pedal had also suffered a seized bearing only a day or so ago.

Anyhow we changed bikes, and rode on and the day lifted off from there. This was taken at the park as we played on the spinning top.

Rendered in a Leica M4P stylee on the iPhone - it does take some good pics.

I've just read about the passing of one of my heroes - Gil Scott Heron. The fragility of his voice on the recent "I'm new here" suggested that he was considerably less strong than I recalled him before his institutionalised visit. I shall remember him always with Brian Jackson on Winter in America and Pieces of a Man, a beacon of the emerging rap scene in the seventies. I was thinking about him recently with all the Twitter controversy - "The revolution will not be televised" he prophesised; No, but it will be orchestrated by Twitter I thought.... I saw him with my brother Christian in the early eighties, in a dark smoky, sweaty club in Newcastle - Peace Go With You Brother ...

The Bottle
Posted by jonboy at 9:57 pm