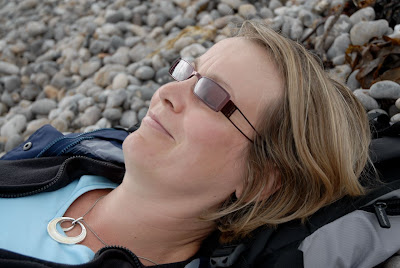 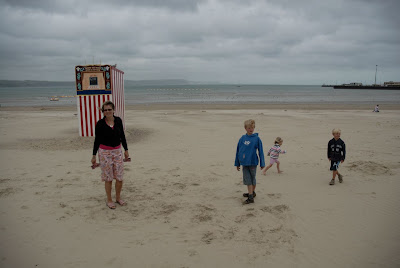 It being the weekend of the 31st August, we had a little camping trip to celebrate Caroline's naughtiest birthday yet! We've just got back from Hook Farm in Uplyme in Devon where we had fun and ate too much nice food. We also did a fair amount of outdoor stuff and dodged the showers along the way.

Highlights of the trip were a bike ride in the hilly terrain that took in the Axminster carpet museum, followed by lunch at the River Cottage Canteen. This epic day had quite a few highlights ending with chippies on the beach at Seaton at sunset.

Saturday we walked into Lyme Regis down the valley from Uplyme, and enjoyed a mixture of music festival and fossil finding on the beach. Again more nice food at the Town Mill Bakery, which as it turns out is one of the major suppliers for 'Hugh's' restaurant. The pizzas were delicious, almost as good as the ones we get at home!

Sunday began with an enormous thunder and lightning session at dawn, followed by a deluge of rain which cleared out most of the campers on the site. Bloody light weights....! We waited for the rain to stop, had a jolly fine cooked breakfast and then had a great day visiting Colyton and Beer, taking it fairly easy in the main. We liked Beer a lot, but curiously didn't drink any whilst there. It's a great old fashioned sort of place, boats parked up all over the beach, and the light over the water was exceptional. Later we went back into Lyme and had a birthday supper at the Bay Hotel with the clan, before playing sandcastles on the beach.

Monday was characterised by more eating of delicious food procured at Bridport, followed by kayaking at Fleet Lagoon near Weymouth. And yes, ...more food there too ....before we finally came home!
Posted by jonboy at 8:15 pm