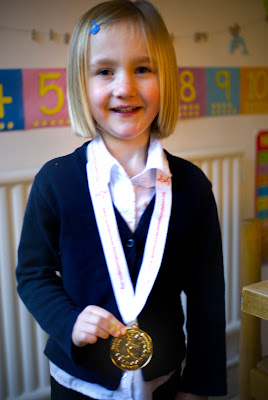 You'd be forgiven for thinking that she'd won an Olympic medal, but Miranda was very pleased with her gold medal in the ProKick competition at school. Even Gregory was unable to get the top spot in his class, although not a hint of jealousy as he bigged up her achievement! Apparently you have to kick the ball as hard as you can into the net and the highest speed was then recorded in each class at Waterside Primary...!