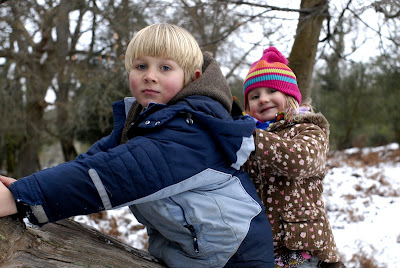 Greg and Miranda on 'The Dragon' yesterday, one of the forest features that means so much to us. It's almost as though we own it - as we rarely see anyone else play with it!

It has the sinuous shape in the Loch Ness monster, and the head is very realistic, but it's starting to age and the bough that forms it's neck is cracking and gaping.

Of course the kids love sitting on it's head, and climbing up it's neck....

In looking for older pictures of this I have found another real gem from almost exactly five years ago, so I'm making a link here
Posted by jonboy at 10:56 pm