Twice in a Week! 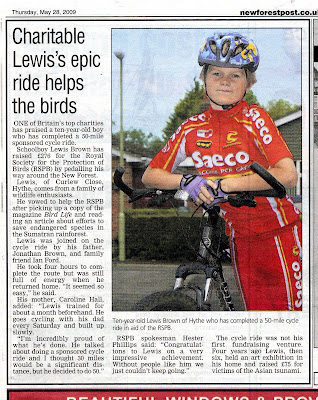 Yesterday it was the Southampton Echo, today it's the New Forest Post....

Lewis has been rather chuffed with the media interest in his bike ride, and now we've had calls from various neighbours saying that they've seen him in the paper, he's well and truly got the taste of celebrity!

We've not had a blog posting for a few days as BT have been incapable of digging a hole and reconnecting a few wires, so the whole street has been without landline and internet services.

- six days trying though I suppose is a fair effort?
Posted by jonboy at 6:33 pm

Well done Lewis !
A celebrity in the family ...