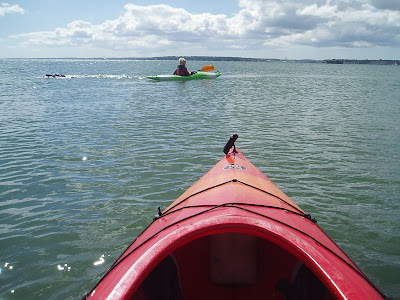 A nice summer's day for a change...! We had a nice bike ride down along the coast to Calshot and Lepe, and back via Blackfield. When we were at Ashlett Creek Lewis spotted little fish leaping out of the water, hundreds of them like shooting stars. Then we noticed crabs scuttling across the mudflats, and again there were scores of them, everywhere we looked - the mud was alive!

This afternoon as the tide was up and the water was very inviting, we took the boats down to Calshot and paddled back towards Ashlett. In the saltgrass we saw flocks of Curlew (about 300 in one group) and Oyster Catchers. The wind this afternoon has been quite strong compared to this morning, but it's been warm and sunny.
Posted by jonboy at 8:53 pm